25 July 2008; Qantas 747-400; Flight 30; VH-OJK; near Manila, Philippines: The aircraft, with 346 passengers and 19 crew members on board, had an explosive decompression event over the South China Sea while cruising at 29,000 feet on a scheduled flight from Hong Kong, to Melbourne, Australia. The event happened about 55 minutes into the flight while the aircraft was over the Pacific Ocean, about 200 miles from Manila. The crew descended to about 10,000 feet above sea level and successfully diverted to Manila. None of the passengers or crew were injured. A portion of the fuselage just forward of the wing root was found missing after the aircraft landed.

Damage included a rupture in the lower right side of the fuselage, just in front of the area where the right wing joins the fuselage. The rupture extended for approximately 2 metres along the length of the aircraft and 1.5 meters vertically. One cylinder associated with the passenger emergency oxygen system, had sustained a sudden failure and forceful discharge of its pressurised contents, rupturing the fuselage and propelling the cylinder upward, puncturing the cabin floor and entering the cabin adjacent to the second main cabin door. The cylinder had impacted the door frame, door handle and overhead panelling, before presumably falling to the cabin floor and exiting the aircraft through the ruptured fuselage. 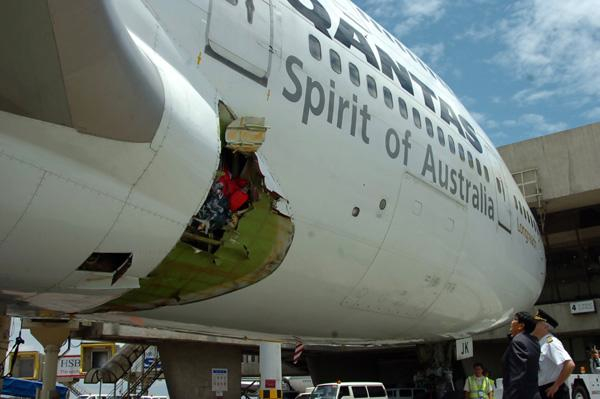 In August 2008, the Civil Aviation Safety Authority of Australia conducted a review of Qantas safety and found no system-wide safety issues, but did recommend an audit of the airline's maintenance practices, including a full maintenance audit of one aircraft from three of the models flown by Qantas, the 737-400, 747-400, and 767-300. No maintenance audit was ordered for the airline's A330 fleet.

The Australian Transport Safety Bureau (ATSB) has released two interim reports about this accident, the first in March 2009 and the second in November 2009. In their second interim report on the decompression event, the ATSB reported that there is no evidence of a safety problem with the oxygen bottles of the type involved in the accident.

The second interim report did not identify the cause of the cylinder explosion, but discussed safety actions that have been taken, including a fleet-wide safety inspections of oxygen system installations by Qantas and a revision of flight crew emergency procedures, including the introduction of a new depressurisation checklist. Also, various tests have not been able to replicate the cylinder failure that initiated the accident.

AirSafe.com will update Accident information as it becomes available.

Overview of the Qantas 747 Depressurization

AirSafe.com Report About this Event