In the US, every adult passenger are required to show some kind of identification card or document that the TSA would find acceptable. If you don't have this kind of documentation, you may either be prevented from going into the secure part of the airport terminal, or you may be delayed while security verifies your identification through other means.

Acceptable ID for domestic US travel
An acceptable ID would be one that is both current, and contains the following: name, date of birth, gender, photograph, expiration date, and a tamper-resistant feature. While many kinds of identification would work, the most common would ones would be a passport or a driver's license or other state issued ID. For the TSA, acceptable IDs include: 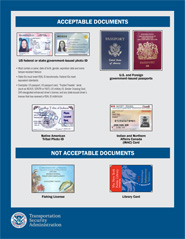 Acceptable ID for travel from the US
There are two kinds of identification requirements for international travel from the US, identification for getting through TSA security, and identification for the airline. The TSA's ID requirement for entering the secure part of the airport terminal is the same for domestic or international passengers. Airlines require that you show a passport, visa, or some other kind of document to confirm that you are allowed to fly to your destination. Check with your airline to be sure.

Acceptable ID for international travel
International travel (flying from one country to another) typically requires a passport. Depending on the country, you may also require a visa or other documentation in addition to a passport. You should check with both your airline and with the the appropriate authorities in the countries you wish to visit to find out what you may need.

Acceptable ID for children
For domestic flights within the US, the TSA does not require children (anyone aged 17 or younger) to have any kind of identification to get past security, even for children traveling alone. If a child is traveling alone it may be a good idea to have the child carry some kind of ID, even if it is not a passport or state issued photo ID.

For international flights to or from the US, all passengers, including infants, must have a passport.

Unacceptable identification documents
Many common ID cards are not acceptable to the TSA. This would include library cards, fishing licenses, school or university IDs, workplace IDs, or expired IDs that would otherwise be acceptable. Also, a weapons permit is not acceptable, even those that are acceptable forms of ID for voting purposes in some US states. Keep in mind that TSA may be able to use these documents, along with other procedures that they have, in order to confirm your identity and allow you go through security.

Do you also always need an ID?
Not always. In the US, for domestic airline flights, TSA does not require IDs for travelers under the age of 18. As mentioned above, if you are 18 or older, and don't have an ID, the TSA has procedures that will allow you to fly on a domestic flight. However, when traveling on an international flight, a passport or equivalent