This review includes all significant safety or security related occurrences from 2015. Numbered events involve the death of at least one airline passenger, and all events meet criteria set by AirSafe.com

Year end review
This is the 20th annual review since AirSafe.com was launched in 1996. While this review, like the previous reviews, highlight a wide range of events that affect both airline safety and aviation security, The focus is on events that result in the deaths of airline passengers. The number of these fatal passengers events has ranged from 19 in 1997 to five in 2013. The five fatal events of 2015 matches the 2013 record of the lowest number of annual fatal events tracked by AirSafe.com.

Four of those five events involved airliner models commonly used in North America and western Europe, and AirSafe.com tracks the fatal event rates for a number of these commonly used aircraft models.

Highlighted events
The event which has attracted by far the most media attention, as well as the most traffic at AirSafe.com, is the Germanwings crash in March that was apparently due to deliberate actions taken by the first officer. The first officer apparently locked the captain out of the cockpit, and no one was able the get through the armored cockpit door before the aircraft crashed. This was actually the second time in the past two years were one flight crew member locked out the other flight crew member and then crashed the aircraft. The Germanwings event also represented the seventh time since 1980 where a flight crew member deliberately crashed an airliner.

The other event that attracted significant amounts of attention also was due to a deliberate action rather than to an accident, and that was the bombing of a MetroJet A321 aircraft over Egypt. While the investigation is still ongoing, it is very likely that the bombing was perpetrated by the group commonly referred to as ISIS.

21 total events
The 21 events listed below consists of five events that resulted in the death of at least one airline passenger, and 16 other events, 10 of which included at least one fatality, included a range of circumstances including airline flights, cargo flights, military aircraft, air show practices, and celebrity pilots:

This review includes important safety or security related occurrences from 2015. There are two types of events in this review, numbered events and significant events. Numbered events must meet the following criteria:


Early stage of the accident investigation

Damage to the aircraft included collapsed main and nose landing gear, both engines severely damaged, with the left engine sheared off, separated radome, and damage to the wings, stabilizers, and underside of the fuselage. While there was a fuel leak, there was no post crash fire. There were no severe injuries among the five crew members and 133 passengers.
Air Canada plane crashes
A320 plane crashes

22 June 2015; Short S312 Tucano T; N206PZ; near Ojai, CA: Composer James Horner, who created music for over 150 movies, including "Star Trek II: The Wrath of Khan," "48 Hrs.," and "Aliens," and who won two Oscars for his work in "Titanic," was killed in the crash of his Short Tucano in southern California. Horner was the only person on the aircraft.
More on this event
Celebrity plane crashes 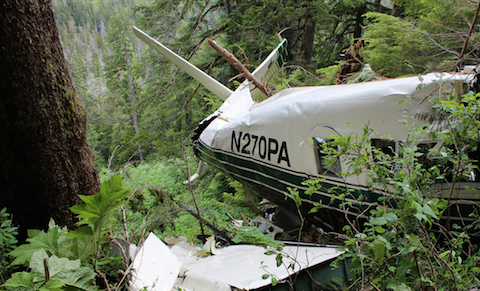 The aircraft was on an unscheduled excursion flight in the area of the Misty Fjords National Monument, and crashed into an area of steep, mountainous terrain. The pilot and all eight passengers were killed. The passengers were from a cruise ship, and were on a sightseeing flight.

30 June 2015; Indonesia Air Force C130B; A-1310; Medan, Indonesia, AK: The aircraft was on a nonscheduled domestic flight from Medan to Tanjung Pinang and crashed into a residential neighborhood shortly after takeoff. The aircraft had a crew of 12 and 101 civilian passengers. The crew had reportedly requested a return to the departure airport. The passengers were military family members and the aircraft who were headed to Tanjung Pinang for Ramadan related activities.