25 January 2009; Ethiopian Airlines 737-800 (ET-ANB); Flight 409; near Beirut, Lebanon:The aircraft was on a scheduled international flight from Beirut, Lebanon to Addis Ababa, Ethiopia, and crashed into the Mediterranean Sea shortly after takeoff.

There were 82 passengers and eight crew members on board, all of whom were killed in the crash. The accident took place at about 2:30 in the morning local time and during heavy rain.

A Lebanese government official listed the nationalities of the passengers as 51 Lebanese, 23 Ethiopians, two Britons, and one each from Iraq, Turkey, Syria, Canada, Russia, and France. Among the passengers was the wife of the French ambassador in Beirut. All eight crew members were from Ethiopian. 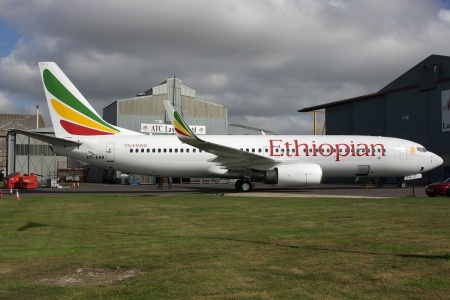 Aircraft History
The aircraft involved was a Boeing 737-8AS, with registration ET-ANB. The aircraft was delivered to its original operator Ryanair in January 2002, and was transferred to Ethiopian Airlines in September 2009 (ET-ANB Photo: Antony J. Best).

This is the third crash of an Ethiopian Airlines jet airliner that has resulted in the death of at least one passenger. The first was a September 1988 bird strike event involving a 737-200, and the most recent was a ditching of a 767-200 during a hijacking in 1996.

Previous 737-800 Crashes
This is the seventh crash involving a 737-800. The first was a September 2006 midair collision involving a Gol Linhas Aéreas 737-800 in Brazil that killed all six crew members and 148 passengers, and the most recent was the non-fatal runway overrun last month involving an American Airlines 737-800 in Jamaica. Three of the previous six crashes involved passenger fatalities.

Five Lowest Fatal Plane Crash Rates by Model
A 25 September 2009 entry on the AirSafe.com News described the September 2009 update to following listing of fatal plane crash rates by model. The video and audio podcast below discusses the aircraft models with the lowest rates. After the Ethiopian Airlines 737-800 fatal crash, the revised estimate of fatal crash rates would change the order of aircraft. The current generation of the 737, which includes the 737-800, would drop from number two to number three, and the A320 series would go from number three to number two. For more details, visit AirSafe.com's Fatal Plane Crash Rates for Selected Airliner Models page.