6 July 2013; Asiana Airlines; 777-200ER; HL7742; flight 214; San Francisco, CA: The aircraft was on a scheduled international flight from Seoul, South Korea to San Francisco, and the rear of the aircraft struck a seawall just short of the runway while landing. The tail section broke apart, and both horizontal stabilizers and the vertical fin separated from the aircraft. Both engines and the main landing gear also separated from the aircraft. The aircraft caught fire after it came to rest, but not before all of the crew and most of the passengers were able to escape. All 16 crew members survived, but thee of the 291 passengers, all teenage girls from China, were killed. Nine of the flight crew members and 40 passengers were seriously injured.

NTSB conclusions
On 24 June 2014, NTSB Board members met to determine the probable cause of the July 2013 crash of Asiana Airlines flight 214 in San Francisco, CA, which resulted in the deaths of there passengers. The Board concluded that there were a number of probable and contributory causes for the accident, with many of them revolving around the crew's understanding of the aircraft's automated systems, in summary, those findings included:

The NTSB found that there were also several contributing causes: 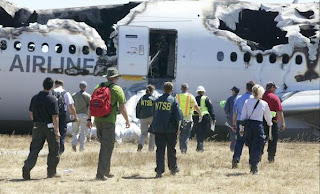 Video of the crash

Approach sequence
Although air traffic control (ATC) allowed the aircraft to attempt a landing under visual flight rules, the flight crew used both the autopilot and autothrottle system during the landing. The sequence of events shortly before the crash featured a number of changes in the flight control system, and according to the NTSB the flight crew's understanding of how the aircraft performed in various autopilot and autothrottle modes led to the crash.

The following is a synopsis of the portion of the NTSB final report on the crash of flight 214 that focused on the landing approach:

NTSB animation of the final approach

Crash sequence
The following information was in the NTSB report synopsis released on 24 June 2014, and from two NTSB media briefings given shortly after the accident.