How to fly with a sex toy

Bonus: "How to fly with a sex toy" seminar - Watch the AirSafe.com seminar on flying with sex toys here.

How to fly with a sex toy under TSA rules
There have been a number of cases where TSA representatives exposed passengers to unnecessary embarrassment and humiliation because the passenger was traveling with a sex toy. In at least once case, a TSA screener was fired for leaving an inappropriate message in a checked bag containing a sex toy.

In October 2011, writer and attorney Jill Filipovic was on an international flight from Newark, NJ to Dublin, Ireland, and upon arrival found in her checked bag a printed advisory from the TSA stating that her bag had been opened and inspected by the TSA. In the margin of the note, a TSA screener added an extra message saying "Get your freak on girl." The checked bag had contained a sex toy, and presumably the message was related to the presence of that device. 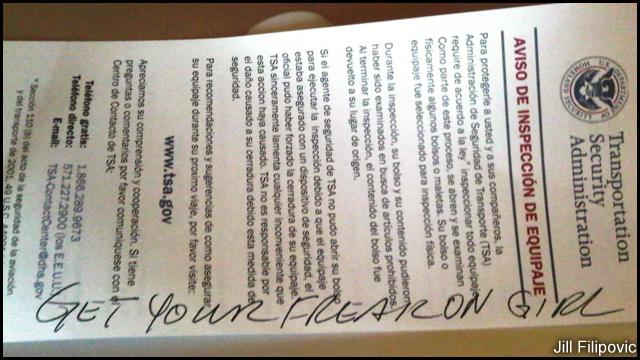 The extra inspection of a checked bag was a normal TSA procedure. The additional comments were not part of a normal procedure, and TSA representative Kawika Riley later apologized for that screener's behavior and described it as "highly inappropriate and unprofessional." That TSA screener was later fired.

Issues brought up by this incident
This incident brings up two important issues for passengers. First, the legal rights passengers have when it comes to traveling with sex toys, and second, how passengers can travel safely travel with these items.

What are the laws or rules concerning air travel with sex toys?
The laws, rules, and regulations concerning travel with sex toys depend on where you travel. In general, when you travel domestically within a country, you should observe the appropriate laws and regulations of that country. When you travel between countries, you have to consider the laws of the country you are traveling from, the country you are traveling to, and any country you may be passing through on the way to your destination.

In the US, when it comes to flying on airliners or going through TSA security, the only limits that matter are the normal limits on hazardous or banned items. While there may be local or state laws restricting the possession of sex toys, there are no federal restrictions on ownership. If you review AirSafe.com's page on prohibited and restricted items, you will see that the TSA would likely not have a reason to ban most sex toys.

Tips for traveling with sex toys
There are a number of common sense things that you can do to protect your sex toys and to limit the likelihood that the TSA will cause you any embarrassment or excessive delays:

Get a bonus book - This article was taken from the book "AirSafe.com Baggage and Security Guide," and you can get this book, which has dozens of other useful articles when you subscribe to the AirSafe.com mailing list.

Complaining about your treatment
Although traveling with sex toys is completely legal in the US, you may still encounter TSA officials whose conduct toward you may be rude or unprofessional. If this happens at a security screening area, you should immediately request to see a supervisor to discuss the matter. You also have several options for submitting a formal complaint. You could email the TSA's Contact Center at TSA-ContactCenter@dhs.gov, or if you believe you have been the target of discriminatory conduct you contact the TSA Office of Civil Rights and Liberties.

For detailed advice on how to complain about your treatment, you may want to review AirSafe.com's airline complaint resources.

How to fly with a sex toy
http://airsafe.com/issues/baggage/sextoy.htm -- Revised 13 April 2016