How to fly with firearms

In the US, guns, rifles, other firearms, and ammunition are not allowed in the passenger cabin, but the TSA does allow passengers to fly firearms and some kinds of ammunition in checked baggage so long as they follow a few basic rules.

As discussed in detail on AirSafe.com, pistols, flare guns, BB guns, rifles, and other firearms are allowed in checked luggage, but must be unloaded, packed in a locked hard-sided container, and declared to the airline at check-in. This restriction also applies to firearms parts and ammunition. When passengers check in, they are required to declare the items with the airline and ensure they are packed properly.

TSA has no role in the declaration process. However,if the TSA searches your checked bag and finds weapons or ammunition that have not been properly declared or packed, they will have to notify a law enforcement officer and an airline representative. Depending on the local or state laws, you may be fined or even arrested.

The key regulations around transporting guns and other firearms include the following: 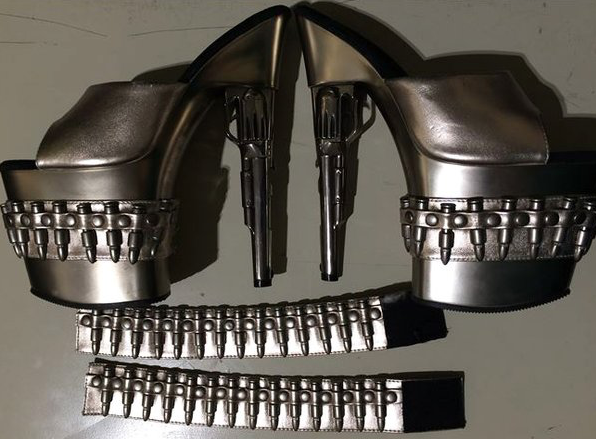 The TSA bans realistic replicas of firearms from the passenger cabin, including carry-on baggage, but the definition of a realistic firearm replica is up to the interpretation of the TSA. For example, a pair of high-heeled stiletto shoes and matching bracelets that have heels shaped like pistols and simulated bullets as part of the design may be clearly intended to be a bizarre, though non-threatening, fashion choice, yet on at least one occasion a TSA representative confiscated these items from a passenger's carry-on bag. The TSA apparently makes no clear distinction between replicas, such as toys, that are clearly intended to look like a realistic firearm, and fashion accessories.

International travel and firearms
The details provided on this page refer to domestic flights within the US. When traveling to or from the US, or when traveling between any two countries, you must understand the laws of your departure country, your destination country, and of any country where you may change planes or have any kind of layover.

How to fly with firearms
http://airsafe.com/issues/baggage/firearms.htm -- Revised 2 March 2016