Safety and security rules for batteries

What's allowed what is not allowed when it comes to batteries on aircraft changes over time. Most smaller batteries used in consumer electronics, such as laptops, cell phones, handheld games, and other personal electronic devices, are allowed as both as checked and carry-on luggage items.

Spare batteries must be protected from damage and short circuit. Battery-powered devices should be protected from getting turned on accidentally. The information below will give you some idea of what is allowed and what is not allowed on an aircraft.

Batteries allowed in checked luggage
Except for spare (uninstalled) lithium batteries, and spillable wet cell batteries (the kind used in cars and motorcycles), all the batteries types allowed in carry-on baggage are also allowed in checked baggage. The batteries must be properly packed to prevent damage and short circuiting (terminals are prevented from touching metal). If it is installed in a device, the device should be turned off. 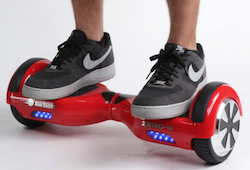 Hoverboards and lithium batteries
Hoverboards are self-balancing two-wheeled boards or scooters that are powered by lithium-ion batteries. Because of a number of incidents of overheating and fires in some hoverboard models, several major US airlines have banned them from either checked or carry-on baggage. While the FAA does not currently have explicit policies covering hoverboards, it does have policies regarding the power levels or capacity of lithium-ion batteries that can be carried on aircraft. Because some manufacturers have not consistently provided details about the size or power of their lithium-ion batteries, it may be difficult to determine if a particular hoverboard would be legally allowed on any aircraft.

Taking batteries through security
Currently, the TSA does not make you take out for separate screening your notebook or laptop computer battery, or batteries from smaller electronic devices, so you can keep these batteries inside your device as you go though security. However, TSA rules change frequently, so it you are unsure if your battery will be allowed, ask an airline representative.

Wheelchair battery exception
While spillable wet cell batteries (the kind of battery used in cars or motorcycles) are normally not allowed on aircraft in checked or carry-on baggage, you can bring them on an aircraft if they are part of a passenger's electric wheelchair. The airline will likely have the battery removed from the wheelchair and transported in a special container. If you have a wheelchair with a spoilable battery, you should arrive at the airport early and notify an airline agent that the battery is a wet cell spillable battery. Non-spillable wheelchair batteries are allowed if they meet other battery requirements.