Former Los Angeles Laker and five-time NBA champion Kobe Bryant, along with his daughter Gianna and seven other occupants, were killed in a crash of a Sikorsky S-76 helicopter near Calabasas, CA. Bryant was flying from Santa Ana, about 30 miles southeast of Los Angeles when the helicopter crashed in hazy conditons in Calabasas.

The helicopter was manufactured in 1991 and was formerly flown by the State of Illinois. 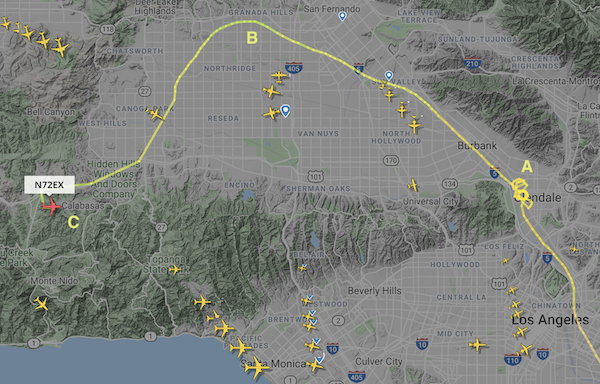 The graphic below is the NTSB recreation of the last few minutes of the flight the illustrates the last portion f the flight in greater detail. The recreation shows that the helicopter was following Highway 101 as it climbed to a point about 1,500 feet above the highway. Information broadcast by the helicopter showed that it then entered a descending left turn, reaching a ground speed of about 160 knots and and a descent rate of about 4,000 feet per minute at the time of the helicopter's last transmission. 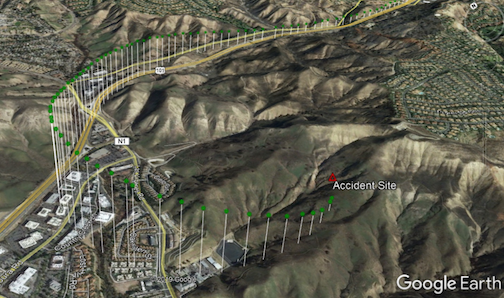 Impact, post crash fire, and cause of death
The impact site was on the side of a hill in a section with a 34 degree slope. The impact crater was 24 feet by15 feet in diameter and two feet deep. The main wreckage was about 127 feet from the impact crater. The fuselage, cabin, and both engines were subjected to a postcrash fire. Evidence at the crash site indicated that neither engine showed signs of uncontained or catastrophic internal failure.

According the to Los Angeles County Medical Examiner, the cause of death for all occupants was blunt force trauma.