Background
In the US, the Federal Aviation Administration has long recognized that unauthorized laser illuminations of aircraft may have numerous hazardous effects on aircrew, including distraction, glare, afterimage, flash blindness, and, in extreme circumstances, persistent or permanent visual impairment ( FAA Advisory Circular 70-2A).

As part of their effort to deal with the hazards posed by lasers, the FAA has encouraged air crew members, air traffic controllers, and the general public to submit reports of aircraft being illuminated by lasers. The FAA has collected this kind of data since at least 2004, and in 2011 published a study (Report DOT/FAA/AM-11/7) about 2,492 laser events that occurred in the US from 2004-2008 that characterized the patterns of exposure by their likelihood of occurrence by time of day and time of year.

In December 2019, AirSafe.com produced a much more extensive study using FAA data from 2010-2018 that reviewed 22,483 FAA laser incident reports. Unlike the earlier FAA study which included reports from every type of aircraft, this study focused exclusively on large air carrier aircraft, which are airliner-type aircraft that seat from 60 to over 500 passengers. Among the key findings were the following:

Who is this report for?
This report may be useful for the following kinds of groups:

What is in the report?
This report includes numerous tables, charts, and data graphics that illustrate the extent of the laser threat in the US, including the following: 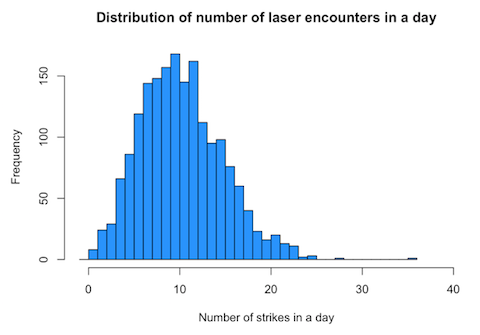 Other graphical displays in the full report include the following:

To see key results such as the distribution of laser strikes by time of day, day of the week, or month of the year, as well as the details for how the laser encounter risk for six major metropolitan areas were created, visit one of the following links:

The full report also includes links to the following:

Other resources
Capt. Patrick Smith on the evolution of laser concerns