On October 12, 1997 singer, songwriter, and actor John Denver was killed when he crashed the Long-EZ aircraft he was piloting after it ran out of fuel just off the coast at Pacific Grove, CA. Denver, who was the sole occupant of the aircraft, apparently lost control of the aircraft while attempting to manipulate the fuel selector handle. Denver had recently purchased the aircraft and had about a half-hour orientation flight the day before the accident.

The NTSB cited Denver's unfamiliarity with the aircraft and his failure to have the aircraft refueled as causal factors in the accident. The following synopsis of the accident is taken from the preliminary NTSB report.

Day Before the Accident 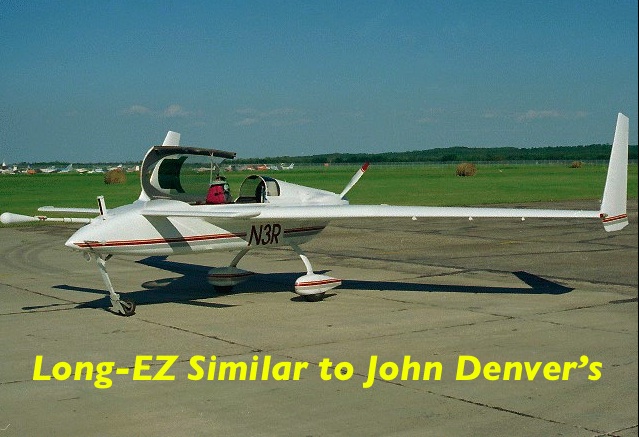 On October 11, 1997 at Santa Maria, CA, the pilot received a 30 minute flight and ground checkout in the airplane by another Long-EZ pilot. Denver then departed on a one hour flight to his home base at Monterey with an estimated 19 gallons of fuel in the aircraft. The checkout pilot estimated about 9 gallons of fuel were needed for the flight.

Day of the Accident
On October 12, 1997 (the next day), a maintenance technician assisted the pilot in preparing for another flight. During preflight, the pilot was not observed to visually check the fuel. The technician noted that when the pilot was seated in the airplane, he had difficulty reaching the fuel selector handle.

The pilot took off and performed three touch-and-go landings in a span of about 26 minutes, followed by a straight-out departure to the west. Ground witnesses saw the airplane in straight and level flight about 350 to 500 feet over a residential area, then they heard a reduction of engine noise. The airplane was seen to pitch slightly nose up; then it banked sharply to the right and descended nose first into the ocean.

Probable Causes
The National Transportation Safety Board determined that the probable causes of this accident included the pilot's diversion of attention from the operation of the airplane and his inadvertent application of right rudder that resulted in the loss of airplane control while attempting to manipulate the fuel selector handle. Also, the Board determined that the pilot's inadequate preflight planning and preparation, specifically his failure to refuel the airplane, was causal.

The Board determined that the builder's decision to locate the unmarked fuel selector handle in a hard-to-access position, unmarked fuel quantity sight gauges, inadequate transition training by the pilot, and his lack of total experience in this type of airplane were factors in the accident.